In the current day and age, military units understand the strategic & tactical need for unmanned aerial systems (UAS), making them an integral part of their arsenal.

Drones have been around for over 100 years now but started to be used as spy planes by the late 1950s, gathering imagery intelligence without risking any lives. Since then, military drones have undergone rapid developments leading to a wide range of different types of drones.

From drones armed with missiles, ATGMs, or bombs to so-called loitering-munition drones (also known as kamikaze drones) or last-mile transport drones, this unmanned technology fills many new challenges and opens a whole new set of possibilities for military forces worldwide.

The Mi-1 is a foldable version from our Martlet Series, fulfilling our client's needs for a more portable ISR drone.

Developed for Defense and Security clients with field-proven, autonomous, and unmatched performance.

Get the most payload capacity and flight time with the portability and reliability of a military-grade multirotor.

Autonomous Drone in a Box

The current NATO UAS/drone classification divides military drones into three classes based on their weight.

CLASS 3 represents systems above 600 kg, categorised as High or Medium Altitude Long Endurance drones (HALE/MALE) that can reach an altitude of 10 to 20 km Above Sea Level (ASL). These systems are deployed at the strategic/national level and use satellite communications (SATCOM) for an unlimited range Beyond Line Of Sight (BLOS).
A military drone within CLASS 2 fits between CLASS 1 and 3, deployed as a tactical tool rather than the more strategic systems in CLASS 3. Although SATCOM is a commonly used way for Command & Control (C2) communications, these systems can also use long-range directional antennas to achieve a 200+ kilometers range within Line Of Sight (LOS).
CLASS 1 includes all military drones weighing up to 150 kg. Subdivided into three categories, Micro (<2 kg), Mini (<15 kg), and Small >15 kg), these military drone systems have a typical range (radius) of 5 to 50 kilometers using a Line Of Sight (LOS) communication link. Height Technologies focuses on the Micro and Mini Drone category, so we’ll expand on the term: “military drone” from there. 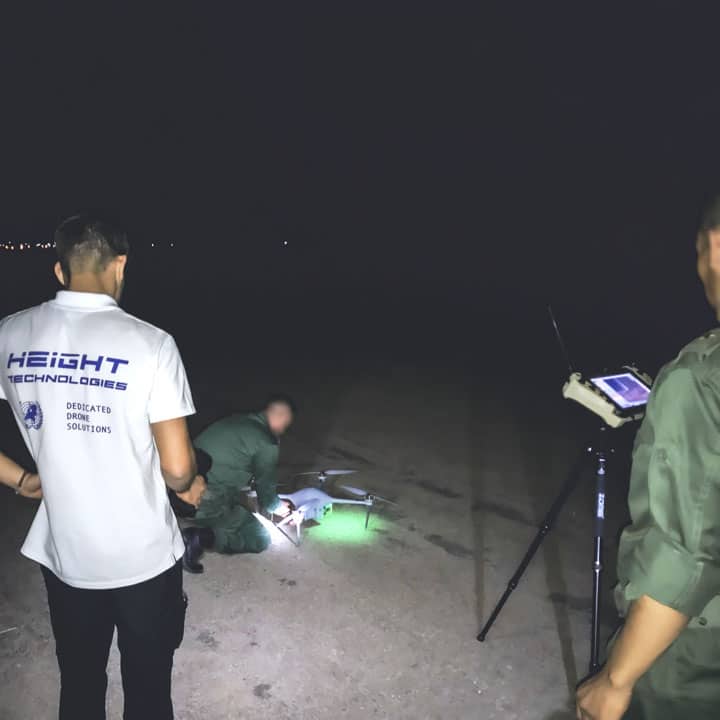 CLASS-1 military drones are mostly used for gathering Intelligence in Surveillance, Reconnaissance, and Target Acquisition missions (ISTAR). The term “Target Acquisition” is used for detecting and identifying a target location in sufficient detail to support or permit the employment of lethal or non-lethal techniques.

CLASS-1 military drones are also deployed as autonomous drone and tethered UAV systems to act as communication relays. The SAMS-T and SAMS-H systems use a tether line that can go up an altitude of 120 meters for an unlimited flight time. This enables operators to set up a portable communication network within a couple of minutes in the most demanding environments.

In case of loss of GNSS/GPS the system automatically initiates Dead Reckoning Mode, enabling it to fly in GPS-denied areas.

GPSdome adds the first layer of resiliency to keep a GPS FIX during a jamming attack, it neutralizes the attack using a proprietary null-steering algorithm. This patented filtering algorithm creates a new pattern to avoid the interference of strong jamming signals by precisely targeting a “null” in the direction of these interfering signals.

The BINGO parameter uses multiple sensors to calculate the remaining mission time before the point of no return. This ensures a timely flight back to the desired landing site, allowing the pilot to fully focus on the mission. 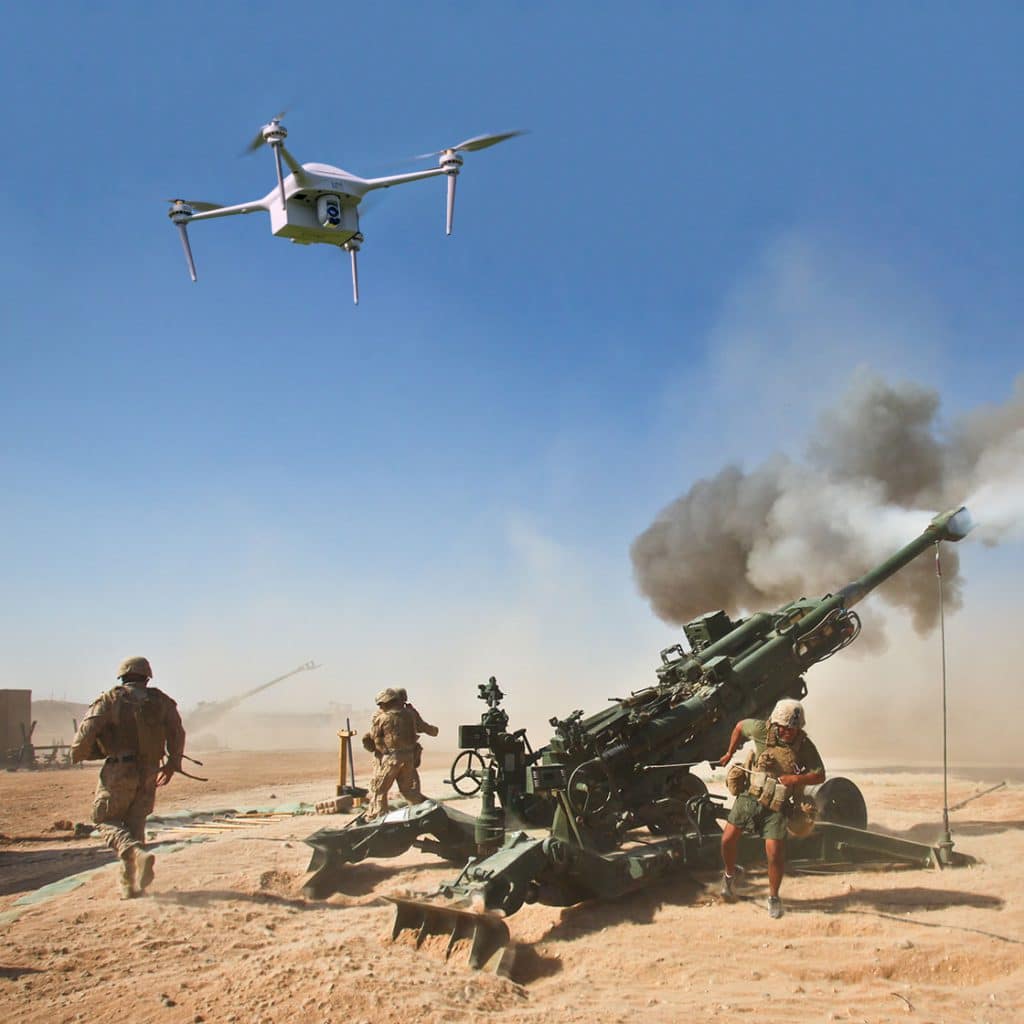 The micro and mini-UAVs enable valuable support by providing an aerial view of the target and direct artillery fire at the target object. The Martlet military ISTAR drones determine the exact geographical coordinates of objects and calculate various distances on the map, all in real-time. 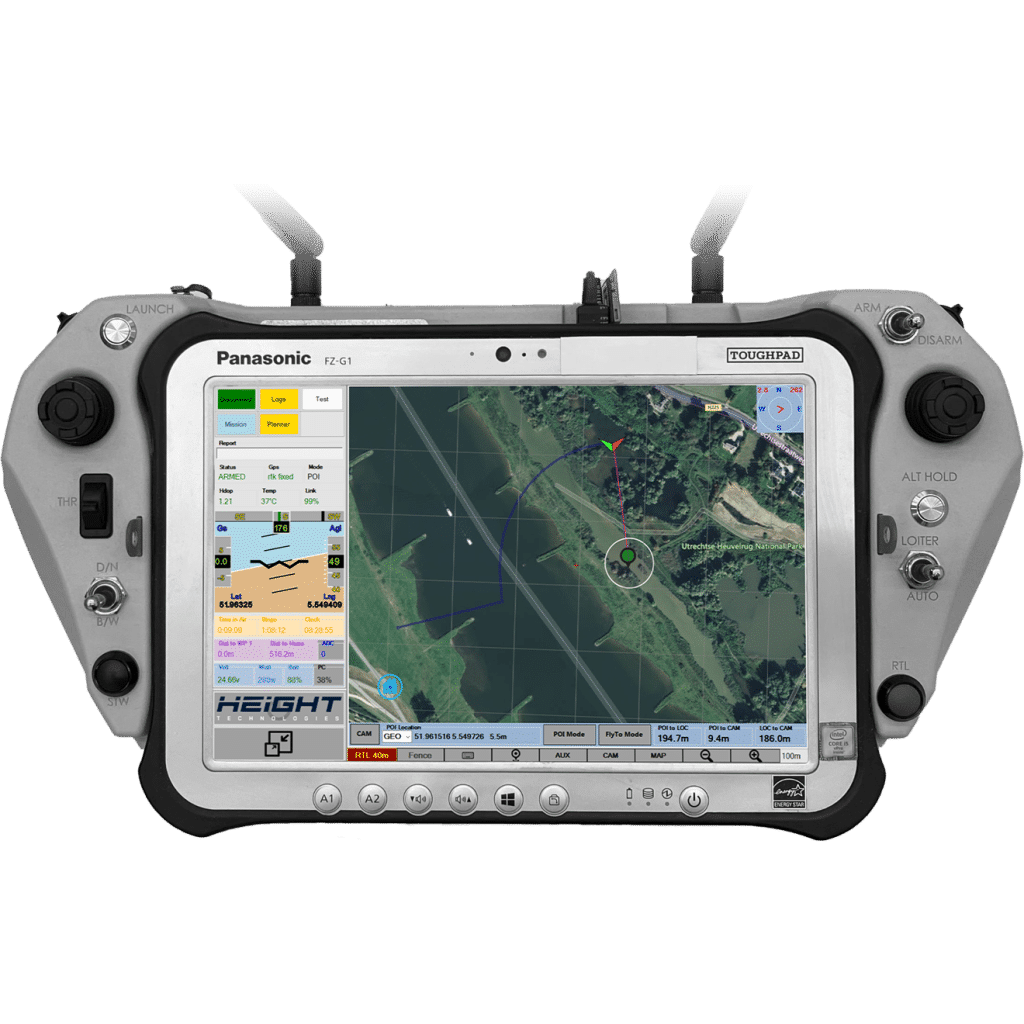 In addition, the Martlet GCS software can load custom (military) maps, giving operators better access to more actionable intelligence when interpreting their live video feed with one of their preloaded maps. 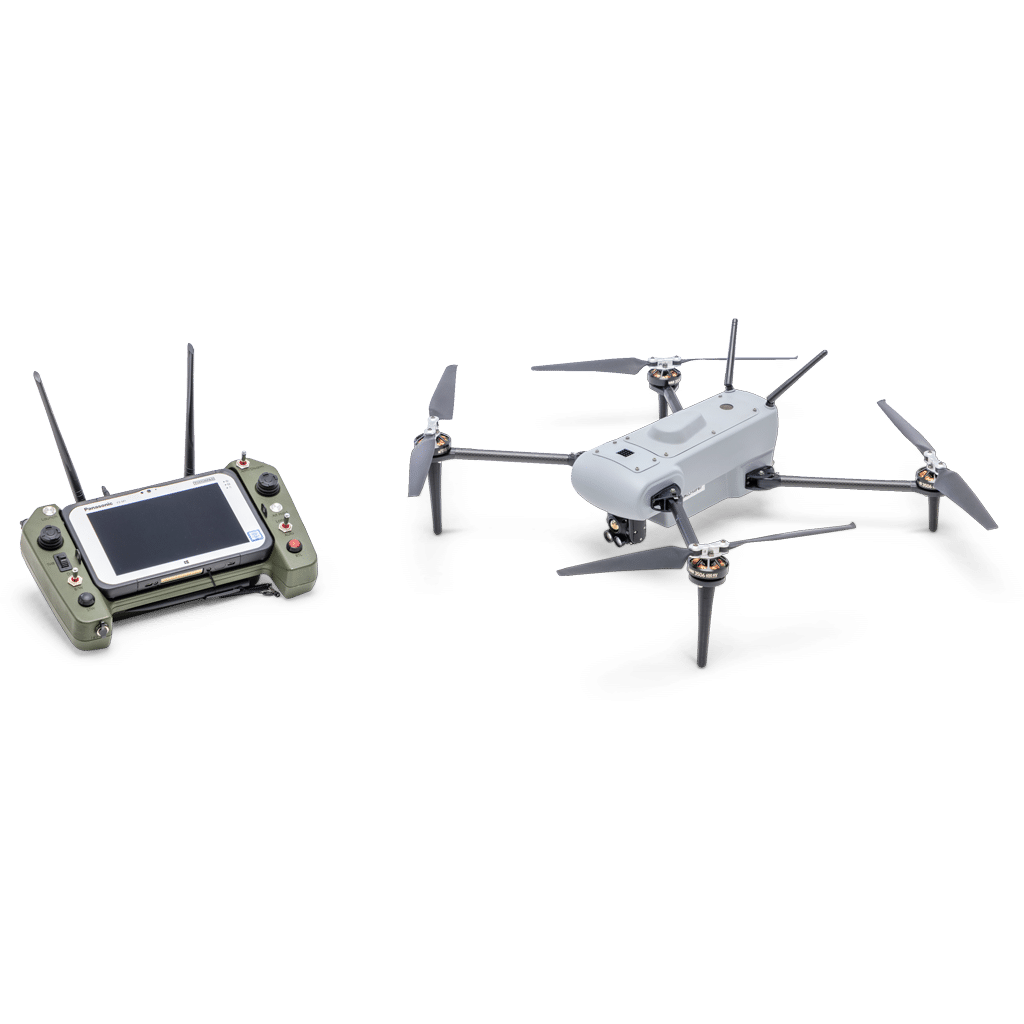 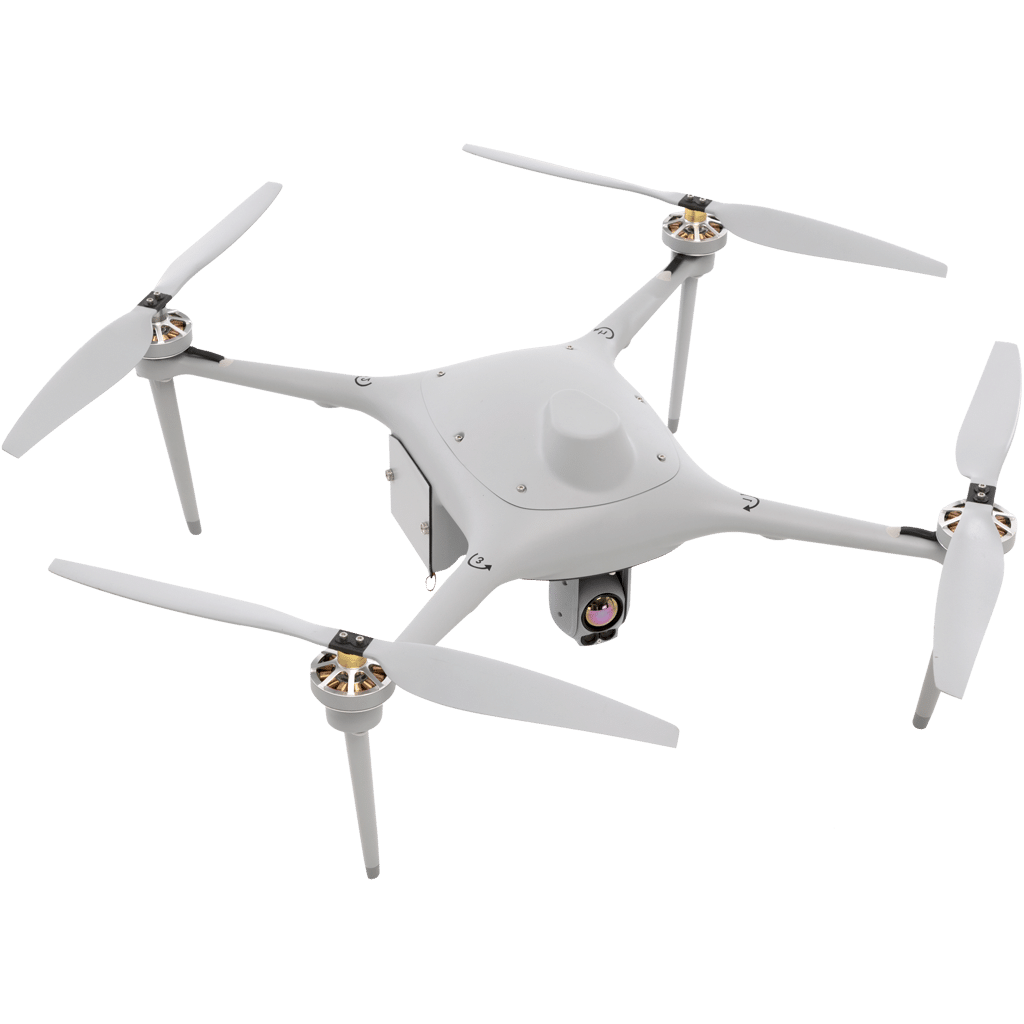 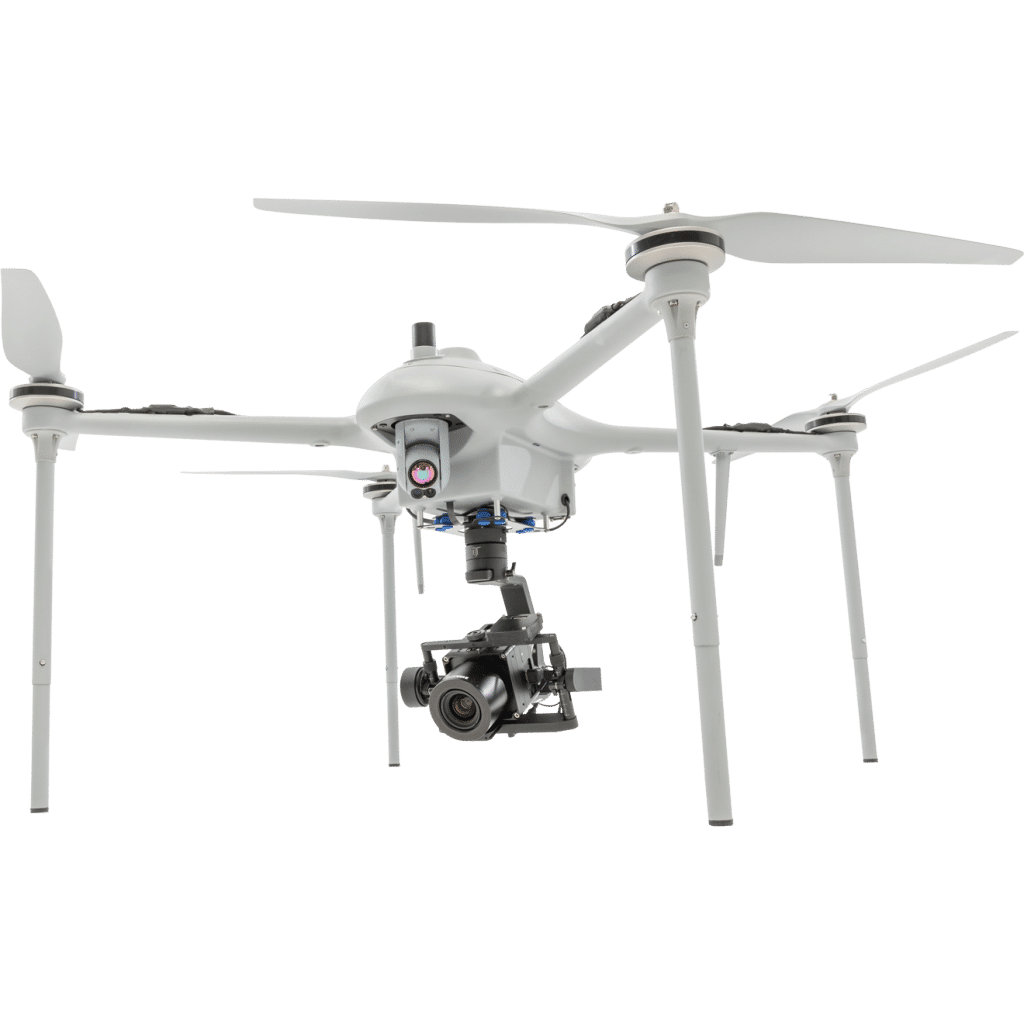 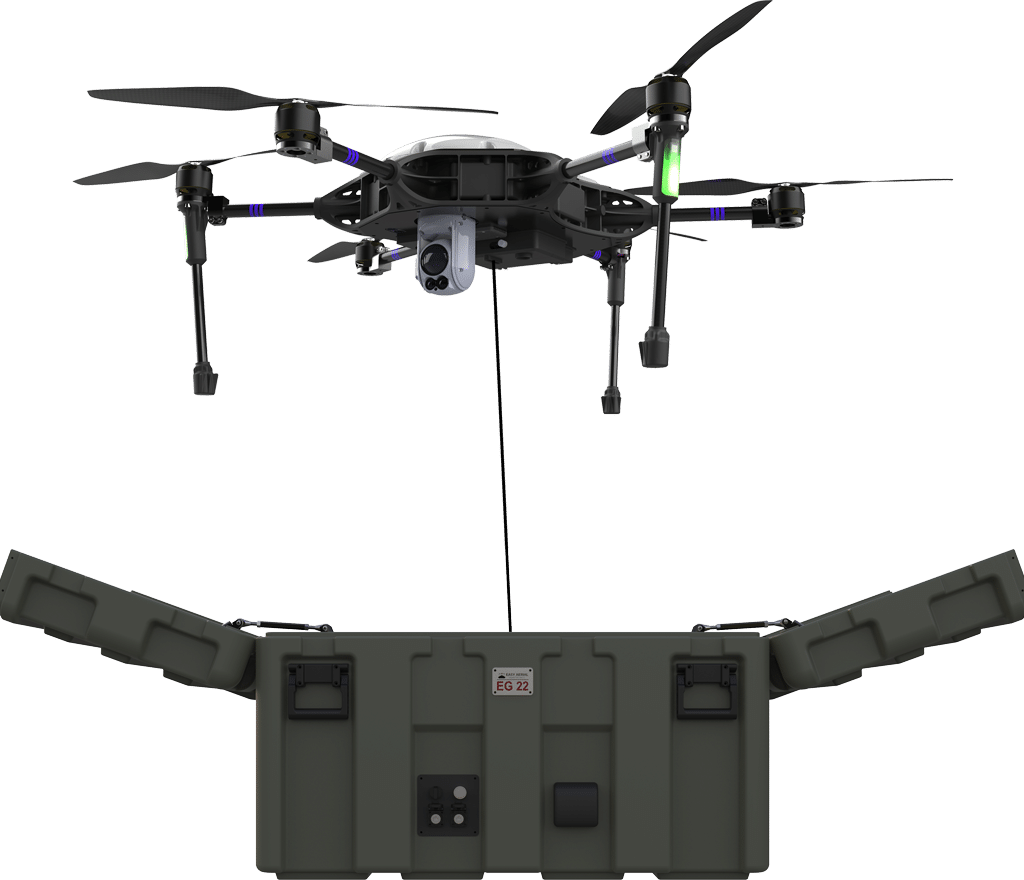 A high-resolution thermal camera with 30X optical zoom, designed for the most challenging security and search & rescue applications.